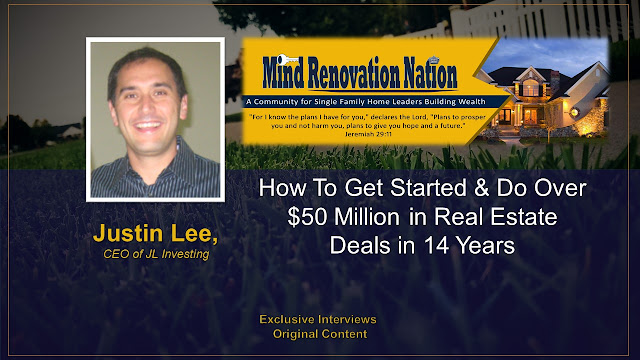 
Justin Lee,
JL Investing, LLC (which runs SellOurHomeFastNow.com) is a boutique real estate investing company founded by the dedicated husband & wife team of Justin & Dreama Lee in 2003. We’re a family owned business and focus on helping homeowners like you find solutions for your problem whether you’re going through a foreclosure, can’t sell your property, or just need to sell their house for all kinds of reasons. Since our founding we have gone on to do well over $50 Million in real estate transactions!

There is beauty in Real Estate. Specifically, because the population is growing. In Real Estate you can receive a steady income that you can accurately predict and rely on, unlike typical sales roles. To attract the best clients and make the top dollars you have to start with focusing on becoming a top-producing Real Estate Agent. There are a number of books and references on selling but not much available on the topic of attracting a Real Estate clientele. In Real Estate the skill of persuasion is one you must develop. To get started there are 5 baby steps that you must take to begin a career. 1. Read books on influence, persuasion, marketing, and asset management 2. Write down and affirm your success, “I am closing 35 homes per year” 3. Find an agent with a lot of listings you connect with 4. Find a mentor to show you the way 5. Associate with others who are currently successful in Real Estate Getting your Real Estate License can be the better avenue when starting in real estate.
82 comments
Read more

Have you ever heard of Silicon Valley? Likely you have. Did you know that Silicon Valley is constantly trying to innovate the real estate industry? Technology continues to push the envelope and transform the direction of the profession every year. In 2020 several marketing trends are revolutionizing the real estate profession and most follow the sociological trends from recent years.”Today, people’s attention spans are short and the way they like to consume content has also changed. This is why content formats like Stories have become popular. They are short, engaging, and addictive in a way that people can spend hours scrolling through one Story after another (N.A, 2019).” The many marketing trends of 2019 continue to evolve into 2020 with technology tools designed to improve the customer’s experience. One-Click: Think Amazon! Amazon knows that people want instant one-click to purchase. In fact, “When we write the history of electronic commerce, the 1-Click patent … allowed Ama
37 comments
Read more

The 3 Biggest Misconceptions About Horizontal Leadership in Real Estate

What is Not Leadership Often leaders learn from books, podcasts, and blogs written by leaders who sell leadership trainings, books, or courses and it can kind of get boring. It can be hard to sift through the information on leadership and find things you didn't already know.  This is where inspiration is hard to come by. So to help you we have created a post of what leadership is not. There are three words often associated with leadership that actually are misconceptions of Horizontal Leadership and those three words are authority, followers, and servant.  The Big Misconception #1: Leaders have to have authority to lead. Authority is defined as the power or right to give orders, make decisions & enforce obedience. Leaders lead with the influence of their actions, they do not force actions with authority. They are role models, examples. When you study leaders, you want to model their actions and be able to get similar results. Management is all about control. To control you nee
Post a Comment
Read more